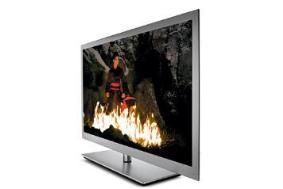 An expensive television is rare in 2010. So what's Samsung doing selling a TV that costs £7000? Surely it can't begin to justify its price? You know what? We're not sure it's supposed to.

We've wrestled with this conundrum for a few days now, and the conclusion we've come to is that the UE55C9000 isn't so much a sensible sales proposition as a technology showcase made retail reality.

It's the physical manifestation of Samsung's desire to push the boundaries of finish, function and form as far as it can, and if the result is a TV that costs a packet, well, that's life.

So what's so special about it? First, it's beautiful to behold, its 7.98mm depth making it, for now, the slimmest big-screen TV we've seen.

It's exquisitely finished too: even the set's rear is a single piece of brushed metal, its pedestal base shrouded by a chromed outer housing.

Audio and video cable routing is equally discreet: uniquely, every input on the C9000 is mounted in the pedestal stand, an inspired idea which so helps to minimise clutter behind the set you wonder why it's not been done before.

Naturally, such a slim TV is easily wall-mounted too, in which case the base-mounted input board detaches from the stand and is then reattached to the TV's rear.

Beautifully lit, supernaturally sharp
As you'd expect, the Samsung relies on edge-lit LED backlighting, which theoretically places it at a disadvantage relative to a ‘full-array' LED set.

That's the price of slim design, yet in practice it scarcely seems an issue: the UE55C9000 musters a picture full of contrast and low-light insight, even in the darker scenes of Shutter Island.

It's almost supernaturally sharp and clean, too: feed it a high-quality transfer such as Avatar and the absolute clarity of the pictures takes the breath away.

It even sounds decent, although we'd never recommend using a TV this big and capable with anything other than an external speaker system of some sort.

Naturally, there's an extensive array of picture adjustments on tap, and most are intuitive enough: the only failing we found lay in the motion-enhancing options, each of which worked, in our view, with variable success.

We never quite mustered entirely seamless movement, though most would doubtless find it perfectly satisfactory.

The on-screen menus are lightning-fast and easy on the eye, displaying picture-in-picture images from TV or Blu-ray while you're browsing LoveFilm, YouTube or whatever else takes your fancy online.

As you'd expect, the Samsung delivers 3D too, and here the C9000's outstanding picture performance combines with its substantial screen size to deliver the most satisfying 3D experience we've yet tried.

You're immersed in the action with Monsters vs Aliens, with only the very slight double-imaging edge shimmer we've highlighted in previous 3D reviews to distract you.

All this, and we've not even covered the UE55C9000's party trick: its touchscreen remote handset features iPhone-style tactility, plus the ability to mimic the TV's displayed video on its smaller 3in screen; handy if you need to get a beer or go to the loo halfway through a penalty shootout.

We should either simply celebrate the fact that this television exists, or get very excited about the advances it heralds: both viewpoints are probably correct.

You see, the ancient Egyptians held that a beautiful thing is never perfect – but here, with this TV, Samsung has got close. Very close.