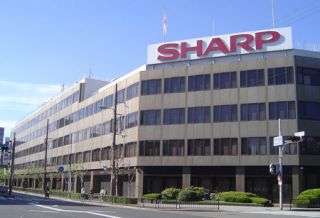 Sharp's plans to tackle its escalating losses look set to become even more radical, according to weekend reports in the Japanese press. The company is said to be considering doubling the scale of its planned job cuts, which could see more than a sixth of its workforce being lost, and spinning off or selling major parts of its operations.

The moves come as investor Hon Hai Precision, which agreed in March to take a stake of just under 10% in Sharp, now wants to not only reduce the ¥66.9bn (£536m) it was planning to invest, in the light of the massive fall in Sharp's share value in the intervening five months, but also increase its stake to 20%.

This would give the Taiwan-based company, better known as Foxconn and the world's largest consumer electronics manufacturing operation, a much greater say in the way Sharp is run.

Having announced earlier this year that it would cut 5000 jobs globally during the current financial year, Sharp is now thought to be considering the loss of 10,000 of its 57,000 workforce.

Other money-saving plans under consideration include the spinning off of its small LCD panel plant, making displays for smartphones, the sale of its air-conditioner and copier operations, scaling back TV assembly in Japan and, as already reported, the sale of TV plants in China and Mexico to Hon Hai.

It could also sell off one of its solar cell plants, several buildings in the area around Tokyo, and some of its holdings in other companies. It currently owns stakes in camera manufacturer Olympus, lithium-ion battery company Eliiy Power, and Pioneer.

Sharp shares rose over 5% late last week on press reports that Hon Hai wanted to increase its stake, although Friday's closing price of ¥184 was still a long way short of the ¥550 at the time the deal was originally discussed in March. However, Sharp has denied the reports of planned sell-offs and Hon Hai seeking a 20% stake.

Sharp shares closed today at ¥174, amid investor concerns about the company's revenue streams should it sell off so significant a part of its operations.

Sharp shares have continued to plummet on the Japanese stock market, following a downgrading by Deustche Securities amidst fears that the company's losses this year could be as much as 60% greater than forecast last week.

Goldman Sachs has also suggested Sharp is heading for greater losses this year: it's figure is ¥150bn (£1.21bn) – since announcing its poor quarterly results at the beginning of this month, and increasing its operating loss forecast, the Japanese company has seen almost £950m wiped off its value.

Much of the concern stems from weak demand for LCD TV panels, of which Sharp is Japan's largest remaining manufacturer, due to a worldwide contraction of the market and increased competition from Korea, Taiwan and – increasingly – China.

The concern now is that the falling shares will attract short-selling traders, who 'borrow' shares from holders, sell them, buy them back later at a lower price and return them to the original owner, thus making a profit. Such trading could put even more pressure on Sharp's shares.

The falling share price puts even greater pressure on the deal Sharp is hoping to finalise with Taiwan-based electronics manufacturing giant Hon Hai Precision industries, which in March agreed a planned investment to take a 10% stake in Sharp. At the time, Sharp's shares were at ¥550, and after a period of stalemate it now seems the two companies are endeavouring to renegotiate the deal.

Acknowledging it's renegotiating with Hon Hai, Sharp said last week it's also selling overseas LCD module factories to the Taiwanese company, which already has a stake in its huge Sakai LCD panel plant in Japan.

The factories, in China, Malaysia, Mexico and Poland, are used to install wiring, lighting and other components on LCD panels, and their facilities are already used by Hon Hai as a means of taking up spare capacity.

If Sharp were able to offload the plants it would be able cut its fixed costs and also hopefully raise efficiency. That would help with its current debt, which its bankers are pressuring the company to tackle this year.

An announcement of the renegotiated terms of the Sharp/Hon Hai deal is expected by the end of this month.

Deutsche Securities has also cut the target price of Sharp shares from ¥365 to ¥110, making it clear it feels the current decline is still some way from bottoming out.

An analyst quoted in the Japanese press said 'Sharp appears to be lagging far behind its competitors in terms of its financial conditions and profitability,' adding that 'We predict grim sales of TVs and smaller LCD panels in the second half of the fiscal year.'

Sharp is in trouble: Japan's largest manufacturer of LCD panels reported record losses for the first quarter of the current financial year, and is forecasting it will find itself in the red to the tune of some £2bn by March next year.

Not surprisingly that has impacted on the company's share price, which has fallen some 60% in the past three months – and that's now threatening a major part of the company's restructuring plans, in the form of a major investment from Taiwanese mega-manufacturer Hon Hai Precision Industry.

Back in March, Sharp announced that Hon Hai – the parent of Foxconn, and the world's largest contract electronics manufacturer – had agreed to take a 9.9% stake in the company, giving it an injection of some ¥67bn (around £550m).

That followed a deal in which Hon Hai invested in the company's huge Sakai LCD TV plant, in order to help it cope with the challenge from manufacturers outside Japan.

Trouble is, the March deal was struck when Sharp shares stood at ¥550 – now they're hovering around the ¥180 mark, Hon Hai is understandably keen to renegotiate the terms of the deal.

The problem faced by Sharp, led by company president Takashi Okuda (right), is a tough one: if it sticks to its original deal for Hon Hai boss Terry Gou to take a 9.9% stake, it will get a much smaller cash injection – less than £200m.

However, were the amount of the investment to remain the same, that would involve Hon Hai gaining a much larger stake in Sharp – something Okuda is clearly determined to avoid.

The 9.9% figure was originally set as a greater than 10% stake would give Hon Hai a much bigger say in the way Sharp is run, including the right to request that the company is dissolved.

So Sharp finds itself at something of a crisis point: does it go for a closer alliance with Hon Hai, which could threaten Japanese control of the company, or go it alone without the help of the Taiwanese company as it stares down the barrel of that ¥250bn loss forecast.

Okuda has said there will be no changes to the conditions of the deal announced in March; Hon Hai – which employs some 1.2m people worldwide and last year has revenues of over $100bn – is clearly keen to increase its stake in, and thus control of, Sharp, and has said a deal has been struck to revise the terms.

This could be one well worth watching: whichever way the deal goes, it could well determine the future for Sharp.