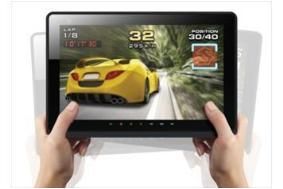 Creative has launched five new 'wireless entertainment' products, including two tablets to take on the likes of the Apple iPad and Samsung Galaxy Tab.

The Android-powered Ziio tablets are joined by the Zen Touch 2 portable media player, the ZiiSound T6 2.1 speaker system and the WP-300 Bluetooth headphones.

All the products are due out later this month or early December, in time for Christmas.

Creative is looking to harness its audio heritage to major on sound quality, with the two tablets, the 2.1 system and the headphones all boasting the superior quality Apt-X Bluetooth encoding.

The Ziio 7 and Ziio 10 tablets predictably sport 7in and 10in LCD screens respectively, and are the first entries to the tablet market to sport Apt-X audio.

Powered by the Android 2.1 software, they won't however be compatible with the Android Marketplace for apps at launch, which seems something of a missed trick to us.

You'll need to wait for a firmware update to Android 2.2, promised by Creative by January at the latest, for Android Marketplace compatibility.

That said, the prototype models we saw at the launch this morning came with pre-loaded apps, including the likes of Angry Birds, with Creative launching a 'ZiiStore' with its own applications.

Both machines have a front-mounted camera, built-in stereo speaker, mini USB connection, 3.5mm headphone jack, plus an accelerometer. There's WiFi as standard but no sign of a 3G model.

The ZiiSound T6 is a 2.1 wireless speaker system with Apt-X Bluetooth, and comes with the BT-D1 Apt-X Bluetooth USB transmitter included for connecting to a portable device.

It's also capable of delivering decoded 5.1 soundtracks from a PC when connected via wired USB and it's due out in December for £350.

The Zen Touch 2 has a 3.2in touchscreen, Android 2.1 operating software, support for lossless audio, Bluetooth wireless audio playback - though no Apt-X - and WiFi access.

It's available in 8GB and 16GB incarnations for £150 or £160, plus an 'enhanced version' with GPS, FM radio and digital compass you will have to settle for an 8GB model that will cost £160.

Last but not least are the Creative WP-300 headphones. Again, Apt-X Bluetooth is the key factor for these on-ear, closed back headphones, which will set you back £90.

The tablet market looks set to get even hotter in time for Christmas, then, with the Creative Ziio sure to turn heads thanks to a knockdown price.

We look forward to putting the Ziio up against the likes of the iPad and Galaxy Tab just as soon as we get samples...

The launch as it happened:

We're in London at the launch of Creative's iPad/Galaxy Tab rival the Ziio, an Android 2.1-based tablet available in 7in and 10in sizes.

Creative claims the Ziio is the first tablet on the market with Apt-X Bluetooth connectivity, and it comes with either 8GB or 16GB of storage. There's a microSD card slot too.

And as both devices are Android 2.1, that means no Android Marketplace and hence no Apps. Creative promises an update for Android 2.2 in early January 2011.

The entry-level 7in, 8GB model costs £200. Also being unveiled today is Creative's Pure Android Audio PMP (Personal Media Player). More details to follow as we get them.