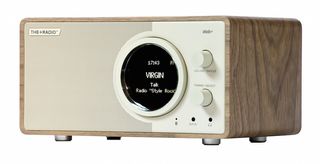 It's no surprise to learn that the team behind the The+Radio range is the same one that helped develop the Tivoli Audio range in the early 2000s.

Now a new brand, called The+Audio, has unveiled a four-strong range of AM/FM and DAB+ radios with the added bonus of wireless Bluetooth streaming.

The designer behind The+Radio is a young Swede called Alexander Ahnebrink, who has worked for (among others) Atelier Bellini, Samsung and JVC.

There's a headphone jack and auxiliary input on the front, plus a second mini jack input on the back. If you want your music in stereo rather than mono, there's also an optional matching speaker.

In FM-only form The+Radio costs £219, and with the extra speaker £299. Or you can have the DAB+ version for £279 in mono, or £359 in stereo. An international version for non-DAB countries, called The+Radio Digital, is also available.