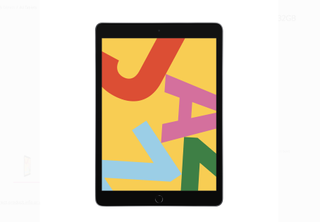 Apple iPad 10.2in $298.99 at Amazon
Apple's newest iPad baby is discounted in one of Amazon's Last Minute Deals. Yes, you read that correctly. It's 10.2 inches of Apple 2019 iPad complete with iPadOS and A10 Fusion chip. Yes, this is the 32GB model (not the 128GB), but it's still a great deal on a brand-new Apple tablet.View Deal

The brand-new iPad boasts a larger 10.2-inch retina LED-backlit display with IPS technology, an upgrade from its 2018-launched predecessor. It's an Apple tablet aimed at business users and creatives, with the added support for a full-size keyboard and pencil (sold separately).

Our advice: this is likely the best iPad deal you'll see before Christmas.