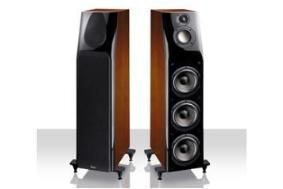 Sold directly from the Teufel website alongside the rest of the company's range, the Ultima 800 speakers certainly look like a fairly serious proposition – and the £2681 price tag pulls no punches either.

Each cabinet contains no less than eight speakers; two woofers, four passive radiator woofers (three of which are rear-facing), a midrange driver and a tweeter.

Each speaker has been constructed using an elite 3-way crossover network and fine-tuned along the way using the Klippel R&D systems, with Teufel promising "no compromise" on the final product.

We've been impressed with what we've seen from Teufel, so we'll try and get hold of a sample for review as soon as possible.