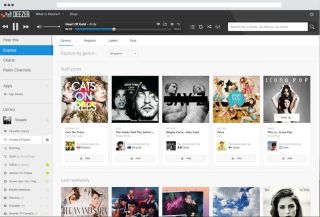 Sales of digital music (that's both downloads and streaming) equalled sales of physical formats such as CD for the first time in 2014, according to the latest Digital Music Report from recording industry body IFPI, with each accounting for 46 per cent of sales during last year.

The latest findings follow last month's figures from the Recording Industry Association of America (RIAA) which showed that streaming music sales contributed more money to the US music industry than CD sales in 2014.

It all points to an "industry in transition", says the IFPI, "with consumers embracing the music access models of streaming and subscription".

A 39 per cent increase in subscription revenues, up to $1.57bn (£1.06bn) for the year, more than offset an 8 per cent decline in download sales. The number of people paying for music streaming subscription services such as Spotify and Deezer rose 46.4 per cent to an estimated 41 million.

And with the arrival of newer services such as Qobuz and Tidal, the latter the subject of a celebrity relaunch by Jay Z and its new owners, that number is set to grow further. Oh, and then there's the small matter of Apple being expected to announce details of its new streaming service, following its $3bn acquisition of Beats Music, at its Worldwide Developer Conference on June 8th.

Frances Moore, IFPI chief executive, says: "It is a reflection of how much we have adapted that digital revenues are today, for the first time, on a par with physical."

However, sales of physical media remain a significant part of the market, and as reported elsewhere vinyl continues to buck the downward trend. Revenues from vinyl sales rose 55 per cent and accounted for two per cent of global revenues. That bodes well for Record Store Day 2015 on April 18th.