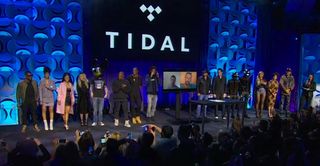 Cynics may suggest that it’s all about the artists wanting to retain their royalties and take back control of how (and in what format) their work is distributed to their fans, but what is certainly encouraging is that the issue of sound quality is a key part of Tidal’s manifesto.

Yes, Tidal has introduced a new ‘standard’ quality (up to 320kbps AAC) service at £10/month to compete with the likes of Spotify, but it remains committed to lossless (CD-quality) streaming for its ‘Hi-Fi’ service at £20 a month and there was plenty of emphasis from the artists at the launch event on audio quality.

In the words of Alicia Keys, Tidal is “the future of music… bringing all your favourite music at the touch of a button”, and promising “exclusive experiences”, suggesting many of the artists involved will be bringing exclusive content to Tidal. Watch out Spotify.

Given the very public spat Taylor Swift had with Spotify (removing her back catalogue in a protest over music royalties), things are about to get very interesting indeed. Which music streaming service signs up which artists, and who has exclusive content, will surely become a key battleground.

Could we end up having to subscribe to several services at once to get all the music we like? This is already the case with TV, of course.

If you want to watch specific sports or sporting events you need subscriptions for BT Sport, Sky or even specialist channels such as BoxNation, while for TV dramas, Amazon and Netflix are investing in their own supply of content to lure customers, highlighted best by House of Cards and Breaking Bad on Netflix.

MORE: Tidal music relaunches in the US

We are clearly at a key turning point in the music industry. As a student back in the 1980s, I well remember the excitement when CD was launched, enabling me to ditch all my worn-out cassette tapes and replace them with shiny new silver discs. No more grappling with a chewed-up tape in my Technics twin tape deck, now I could just pop in a disc and all would be perfect.

And if Tomorrow’s World was to be believed, I could even smear jam on my shiny new CDs and they’d still work perfectly. Nonsense of course, but it made for entertaining viewing at the time.

Fast forward more than three decades and the music business has transformed beyond all recognition. The development of the internet and MP3 compression led to illegal filesharing on a major scale (remember the early days of Napster?) and sent record industry executives into a spin.

People could easily share music online for free through peer-to-peer sites without having to buy a physical disc, and suddenly the big record labels could see their profits disappearing fast, with musicians missing out on royalties too. Of course they didn’t take it lying down, and the legal action came thick and fast.

Those early filesharers may well have been in breach of copyright, but a trend was emerging that wouldn’t go away. The convenience of being able to access a huge library of music online, and download your favourite tracks or albums to a portable MP3 player, was just too good to ignore.

Apple’s creation of the iPod/iTunes model brought about a legal, paid-for service that calmed the nerves of those record industry executives (although if you read Walter Isaacson’s Steve Jobs biography, Apple’s founder still had to twist some arms to make it happen) and led to a plethora of pay-to-listen music download stores.

Then, in 2008, came Spotify which once again changed the musical landscape. Music streaming became hugely popular, and by January 2015 Spotify was claiming it had 60 million users worldwide, of which 15 million were paying subscribers. Spotify is not alone of course, with the likes of Google Play, Deezer, Napster, 7digital, Rdio, Blinkbox, Pure Connect, Sony Music Unlimited and others joining the streaming party.

And following its $3bn acquisition of Beats Electronics, all eyes are on Apple as it plans its own music streaming service...

In 2014 the industry reached a tipping point: for the first time music streaming revenues contributed more money to the US music industry than CD sales, according to figures from the Recording Industry Association of America (RIAA). A statistic that no doubt caught the eye of Jay Z and friends.

Note that last figure: CD is far from dead and still accounts for a sizeable chunk of the market, but as with video, streaming is gradually becoming more popular and starting to challenge sales of disc-based formats.

That said, it’s also worth noting that the RIAA reports that music downloads remain the dominant revenue stream, bringing in $2.56bn in 2014. But it seems the tide is turning, with some reports suggesting streaming could help double the value of the music industry by 2020.

Will lossless streaming replace the CD? We shall see.

Either way, how we listen to and access music is fundamentally shifting. Once iTunes was the default option for many, but now the likes of Spotify, Deezer, Tidal and Qobuz are bringing us a wider choice of options. Having put up with low-resolution MP3s for too long, the issue of sound quality is once again back on the agenda (hurrah!) - and being brought to a wider audience than ever thanks to Tidal and the musicians involved.

While iTunes offers its downloads as 256kbps AAC files, and in the streaming world Spotify offers 320kbps Ogg Vorbis for its highest, ‘Extreme’ option, the likes of Deezer, Tidal and Qobuz are now offering lossless CD-quality (16-bit/44.1kHz) FLAC streaming for those prepared to pay up to £20 per month.

And the hope is that later this year 7digital, Tidal, Qobuz and others will introduce high-resolution streaming (and by that I mean better-than-CD quality). Specialist classical service Classics HD Online already offers a selection of high-definition recordings in 24-bit/96kHz quality for streaming, and others are expected to follow suit.

This is a contentious area, as not everyone is convinced that humans can actually hear the difference between 16-bit/44.1kHz files and higher resolution ones at 24-bit/96kHz and beyond. You need only visit the What Hi-Fi? Forums to get an understanding of how strongly some people feel on this subject, one way or the other.

What's more, convincing people to pay £20 per month instead of £10 per month is no easy task, as much of the online reaction to the Tidal launch once again made clear. The fact that plenty more people, especially young people, are happy with the low-quality free Spotify service or even YouTube, is arguably the elephant in the streaming room.

And sadly it wouldn't be the consumer electronics industry if the launch of a new format didn't come with some added confusion...

The term “high resolution” is already being misused. Deezer is advertising its Elite service (currently only available on Sonos in the UK) as “high-resolution audio”. It’s not what the rest of us call high-res audio, of course – Deezer Elite, like Tidal and Qobuz, is currently streaming at lossless CD quality - and Sonos systems can’t handle anything above 16-bit/44.1kHz.

For the record, the Japan Audio Society defines high-res audio as 24-bit/96kHz and above. And the Consumer Electronics Association of America (CEA), in conjunction with Sony, Warner and Universal Music, last year issued this definition: “High resolution is lossless audio that is capable of reproducing the full range of sound from recordings that have been mastered from better-than-CD-quality music sources.”

Whatever the definition, high-resolution streaming seems to be coming and there are plenty of manufacturers who do offer the hardware to handle 24-bit/96kHz audio and beyond.

7digital (which powers Technics Tracks and e-Onkyo’s download service) has already confirmed it will use Meridian’s Master Quality Authenticated (MQA) format to introduce a high-res streaming service in 2015. MQA is a more efficient coding method that allows for studio-quality music files that require much less space, and hence bandwidth, making them easier to stream.

7Digital is not alone. Tidal and Meridian successfully demonstrated high-res music streaming using MQA last month, indicating that Tidal is well down the development path of its own high-res offering, which would accord with its commitment to further improving sound quality.

And French service Qobuz also hopes to adopt MQA for its high-res streaming service due to launch this summer.

Whether consumers will pay more for high-resolution audio streaming remains to be seen. As more players enter the market, the hope is that those monthly subscription rates will fall.

Deezer is already undercutting Tidal and Qobuz with its Elite CD-quality streaming service, which existing Deezer Premium+ subscribers can get for £10/month provided they subscribe for a full year. However, Deezer Elite is currently only available on Sonos.

This works out as half the cost of similar offerings from Tidal or Qobuz, and the same as lower quality (320kbps) Spotify Premium - though we'll reiterate Deezer's CD-quality service is currently only available on Sonos, reverting to standard quality audio on your computer, phone or tablet.

If Tidal (and others) do launch a high-res streaming service later this year, it will be interesting to see if it this changes the streaming pricing model. Tidal has already introduced a standard £10/month tier to compete with Spotify (standard Tidal offers "tracks up to 320kbps AAC" quality).

Could we eventually see high-res streaming at, say, £20/month and the FLAC CD-quality service at £10/month to bring it into line with Deezer Elite? And what will happen to free tiers, as offered by Spotify?

The music industry has become increasingly aligned against the 'freemium' model, with many services, including Tidal, not offering a free service. As mentioned earlier, Google-owned YouTube remains a hugely popular and completely free thorn in the streaming business.

Time will tell, but one thing’s for sure: after last night, the music streaming business got a whole lot more interesting...