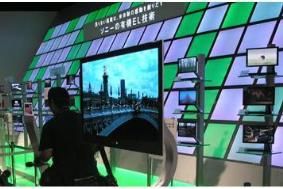 The paper says that, whereas once the company was happy to lead in technology, even if the products didn't make an instant profit, now all its efforts are dedicated to turning the TV division around, after six years of losses.

Sony has already launched its XEL-1 11in OLED TV, just 3mm thick, in certain markets, and was planning a launch this year of a larger-screen version. It showed a 27in prototype (pictured above) at the CEATEC show in Japan last Autumn, along with flexible models and OLED displays for portable 'reader' devices.

27in OLED put on hold
Earlier, in Summer 2008, Sony Chief Executive Sir Howard Stringer had said that the company planned to launch a 27in OLED TV within a year; now, according to the WSJ's sources, that will be put back until at least 2010.

The main problem with OLED is that it's pricey both to manufacture and for consumers to buy – that 11in screen carries a price-tag comparable with conventional 50in plasma and LCD TVs – and that doesn't sit well with the TV division's loss-making.

In the last financial year, Sony's TV division lost Y127bn, or around £810m, more than half of the company's operating losses for the year. TVs accounted for just 16.5% of the company's revenue in the same period.

Praise, but no sales
In an interview earlier this year, Sir Howard said that "We got great praise for [OLED], but then you don't sell any. So then, all of a sudden, you have a different problem."

And a part of that problem is thought to be the low yields currently possible on OLED manufacture: although Sony won't give yield figures, it's thought they may be as low as 60%, meaning that four out of every ten screens it makes are unsaleable. The move to larger screens would, it's suggested, give even lower yields, and further increase costs.

Trailing Korean rivals on technology...
Certainly Sony needs something to get it back atop the TV pile: once the world's leading TV maker, it's now considered to be trailing behind Korean rivals Samsung and LG. Former Sony president Ryoji Chubachi was a great advocate of OLED, referring to it as "a symbol of Sony's comeback", but it seems Stringer, his successor, is not so sure.

Some of Sony's rivals seem less daunted by the difficulties of making OLED screens: LG is thought to be planning the launch of a 15in model later this year, and Samsung has shown a 31in model, but told us last Autumn it thought a consumer release was some way off. Panasonic is also thought to be working on OLED screens.

But the main problem for OLED could be current, not future technology: LCD screens are getting thinner, lighter and better, thanks to developments such as LED backlighting. They also use less energy, and are becoming ever more affordable.

...And on sales
Figures just announced for global TV sales in the second quarter of this year show that in volume terms Samsung has a 18.2% market share. It's been the market leader for over three years.

In revenue terms Samsung had a record 23% market share in the second quarter of this year, with LG second on 13.7% and Sony about two percentage points behind in third on 11.8%. LG overtook Sony to take the number two spot in the first quarter of this year.