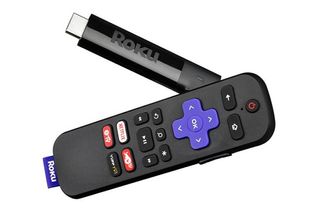 In honour of National Streaming Day (today!), Roku has launched a month-long discount on its Streaming Stick+ and Express video streamers.

The 4K- and HDR-supporting Streaming Stick+ is "an excellent all-rounder of a video streamer", as we stated in our recent four-star review. We may find the Amazon Fire TV Stick 4K an even better bargain, but this well-performing, vastly-featured and easy-to-use Roku is a fine buy indeed for anyone looking to expand their access to 4K content.

The Roku Express, which we haven't had the pleasure of in our test rooms, is essentially a more affordable HD version. Like its sibling, it provides access to the usual apps - BBC iPlayer, Netflix, WWE Network, All4, NOW TV, Hayu and Prime Video, etc - as well as The Roku Channel Store, which boasts over 5000 channels hosting 150,000 TV shows and films. For very little money, Roku's Express promises quick and easy access to a diverse range of HD content.