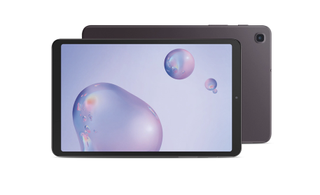 The need for an ultra-portable tablet – something to make daily commutes and long-haul flights infinitely more enjoyable – might be less pressing, but Samsung's newest tablet looks like a good proposition regardless.

According to the spec sheet, Apple's iPad line-up might have further competition too, because the 2020 update of the Galaxy Tab A boasts LTE connectivity, 10 hours of battery life and (the best bit) a stone cold $279 price tag.

The Galaxy Tab A, available for pre-order now and expected to ship on 30th March, is essentially a 4G LTE-capable update of the existing Galaxy Tab A.

Also on a par with the most recent Galaxy Tab A, the Galaxy Tab A 8.4 runs on the octa-core Exynos 7904 processor, offers 3GB of RAM and comes with 32 GB of storage along with a microSD card slot – which you could use to level your storage up to 512GB at any time. There’s a headphone jack, plus Dolby Atmos speakers too.

In terms of aesthetic, the Galaxy Tab A 8.4 looks very much like a smaller version of last year's non-LTE model, albeit in a splendid new mocha colourway.

It will ship with Android Pie, unlike the Galaxy S20 phone lineup (which use Android 10), and the Galaxy Tab A 8.4 won't have DeX support (for supporting a keyboard, mouse or monitor, etc.) which the more premium Galaxy Tab S6 does. Like it's older Tab A siblings, the Galaxy Tab A 8.4 is meant to sit in the budget tablet category.

That said, the least expensive iPad with cellular capabilities you can purchase in the US will set you back $459, so Samsung is bettering it price-wise by quite a margin. We've yet to test the new model, but if it's an affordable tablet offering online on-the-go connectivity you seek, the Galaxy Tab A 8.4 LTE is worthy of a second look.

The 2020 Galaxy Tab A is currently only available through Verizon Wireless, but AT&T, Sprint, US Cellular and T-Mobile models are promised. Once pricing and availability for the UK, Europe and Australia is known, we'll update this page.

Oh, and no news on Samsung's promised world-first Galaxy Tab S6 with 5G, yet...

Get four months of ANY Tidal plan for just $4