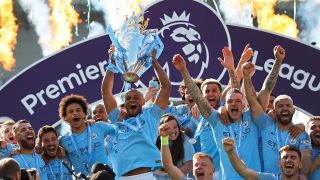 Besides the news that Samsung had launched a new 55in 8K QLED TV, there was another interesting snippet that slipped out of of its IFA 2019 press conference.

Samsung confirmed that Amazon Prime Video will be streaming some of its allocation of Premier League football matches in 4K this winter. We've been assuming this would be the case, ever since Amazon won rights back in June 2018, but this is the first confirmation we've had. We're just surprised it didn't come from Amazon!

In case you didn't know, Amazon Prime Video has the rights to all of the Premier League's matches on the 26th and 27th December 2019 plus the first midweek round of matches during the same month.

The exact quote from Samsung's spokesperson at the press conference is as follows: "Consumers in the UK can enjoy select [Premier League] games on our smart TV platform via Amazon Prime Video. Amazon will deliver this in 4K, but our Quantum Processor will upscale this to pristine 8K quality."

We assume Amazon won't be able to offer 4K streams of all the games simultaneously on the 26th and 27th, or during midweek, hence the use of the term "select matches". The second sentence just references watching the content on Samsung 8K TVs.

We assume Amazon will make an official announcement about its offering closer to the time. Could there be a chance Amazon will add Dolby Atmos and HDR to its streams? Will the streams be available for any other markets besides the UK? Time will tell!

How to live stream Premier League football and watch in 4K