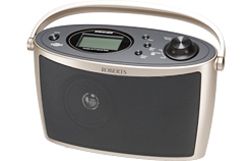 It's compatible with the company's ConnectR iPhone/iPod Touch app, allowing listeners to control the radio using their Apple portable.

The Roberts Stream 105 connects to thousands of internet radio stations via wi-fi, and being portable, can be used anywhere where there's a wi-fi connection.

Using ConnectR, it can also stream music from your PC through the Stream's speakers.

Other features include an aux-in socket for connecting an iPod or MP3 player, 10 presets, two alarm timers and a headphone socket.