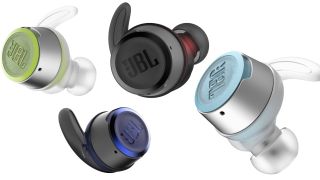 The mid-tier QCC304x and premium QCC514x chips integrate active noise-cancellation technology alongside the increasingly popular 'hear through' function, allowing cheaper earbuds to adopt the functionality. Currently, ANC tech is mostly the preserve of premium propositions such as the Apple AirPods Pro, Sony WF-1000XM3 and Sennheiser Momentum True Wireless 2 around the £200/$200 mark.

The chips are supposedly more power efficient, too, so that even with noise-cancellation on battery life should last longer.

Both chips feature Qualcomm's TrueWireless Mirroring technology, too, which wirelessly connects just one earbud to the phone (or other source) so that it can mirror playback to the other earbud. The idea is that this warrants less complex synchronisation and therefore delivers a more reliable, robust connection.

This design also allows one earbud to be taken out without it affecting playback on the other. And Qualcomm says that if you are, say, on a voice call and your right-hand side is noisy, it will automatically switch to using the microphone on the left bud.

The difference between the two chips lies predominantly in their voice assistant capabilities. While the QCC304x provides push-button activation (meaning you'll have to physically push a button to activate voice control), the QCC514x is able to initiate voice control through a wake word, ie. the wearer saying "Alexa" or "Hey Google". Qualcomm claims the QCC514x is capable of a 22 per cent longer battery life with ANC and 'always-on' voice detection on.

It seems Qualcomm's new chips (the QCC304x especially) could pave the way for more affordable noise-cancelling true wireless earbuds, then – and who would argue with that?