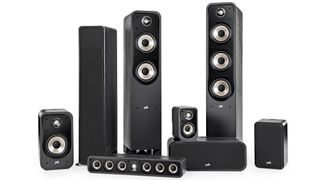 Polk has launched its Signature E Series of speakers, which is an updated version of its original Signature Series, and comprises a wide collection of floorstanding, centre and standmount speakers.

Changes that warrant the new range include improved drive units and crossover components, as well as new crossover topology and a supposedly refined bass tuning.

The new collection consists of the S60e, S55e and S50e floorstanders; the S35e and S30e centre speakers; and the S20e, S15e and S10e standmounts - all eight of which are available in white or black finishes.

The six-driver S35e is the slimmest centre speaker, standing at just 4in tall, while the two-driver S30e has a more typically chunky build. Both also marry 1in Terylene tweeter with polypropylene mid-bass drivers (3in in the S35e, 5.25in in the S30e).