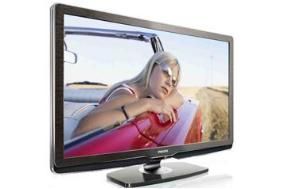 All sets have Philips' Pixel Plus HD technology with 50Hz refresh rates, a 5 millisecond response time, and 6.2 million pixels per second. They're also Philips' most power-efficient sets to date.

Next up is the 7000 series of TVs, which follow the 'more picture, less frame' concept, and have very thin bezels as a result. Sizes again range from 32-52in, and all sets are Full HD and feature four HDMI inputs.

They also use Philips' Pixel Precise HD with HD Natural Motion, which gives them a 100Hz refresh rate, 3ms response time, 250 million pixels per second and a claimed contrast ratio of 80,000:1.

The slim and thin trend continues here, but now Ambilight's thrown into the bargain, too. Philips has made improvements to the Ambilight spectra to make the light that's output from the sides closer match the onscreen action.

These 32-47in screens have the same Pixel Precise HD technology as the 7000 series, but they also add an Ethernet connection for streaming digital content from your PC and accessing Net TV.

This last feature is a free web-browser that's accessible from a click of a dedicated button on the remote. It has a number of web pages on its front screen that have been optimised for display on a TV, like TomTom, ebay and YouTube, but it's also able to access the wider web.

The top of the 2009 range is actually split in three, starting with the 32 and 37in 9604s. These have a charcoal-grey, aluminium bezel, and are just 20mm deep at their slimmest point.

The 9664s are available in the 42 and 47in sizes and have all of the features of the 9604 series, but with the addition of a 200Hz Clear LCD. This results in an 'unbeatable' response time of 1ms.

Finally, Philips gave us another look at the Cinema 21:9, which now has Ambilight. You can click here to read more on our first look at this extraordinary 56in 2560x1080, ultra-widescreen display, but needless to say, it's a very dramatic displayer of Blu-ray.

Philips has revealed that it will cost 4000 Euros when it launches in mainland Europe, supposedly in April. We'll bring you the UK price as soon as it's confirmed, and a review as soon as Philips lets us borrow one.

For details of the rest of the Philips 2009 home cinema and hi-fi range, click here.