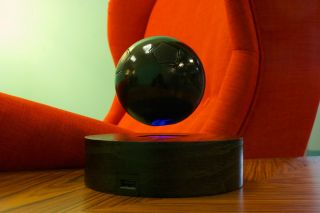 But Californian development team OM Audio has looked to push the boundaries of innovation yet further with the introduction of what it calls the "world's first levitating Bluetooth speaker" – and it is certainly attention-grabbing.

The new OM/One speaker has been designed to connect via Bluetooth to "all major smartphones, tablets and computers", with the main feature its hovering orb – when detached – that also acts as a portable speaker on the go.

OM Audio has started its own crowdfunding campaign that'll let you get your hands on the speaker before it hits the shelves for $179 (£107) – plus $20 (£12) for international shipping. And part of the proceeds will go to charity.

Two OM/Ones can be paired together to deliver stereo sound, with the levitation of the speaker orb achieved using the OM/One Base – a magnetic unit that measures 6.3in in diameter. The height of the levitation is 1.2in.

And the speaker orb itself is a mere 3.6in in diameter, weighing 0.75lb and housing a 75mm audio driver. It is Bluetooth 4.0 compliant and has a wireless range up to 33ft, providing up to 15 hours of continuous play.

OM Audio founder and CEO David DeVillez formerly held the post of director of operations of R&D and engineering at Velodyne Acoustics, and is credited with devising the levitating driver that is an integral part of the OM/One.

DeVillez said: "Prior to our crowdfunding campaign, we travelled Silicon Valley getting feedback from some prominent entrepreneurs and musicians and we’ve been very humbled by the praise we’ve received."

With this year seeing an increase in demand for Bluetooth speakers, and more manufacturers now exploring how to bring wireless streaming to yet more people, the OM/One seems certain to turn a few heads.