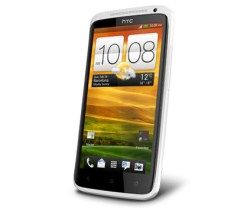 The One X, which leads the new HTC line-up, is joined by the HTC One S and the HTC One V.

HTC's One S is the company's slimmest phone yet, measuring just 7.6mm thin and with a 4.3in screen and 1.5GHz dual core processor. It still sports Android 4.0, Beats Audio, 1080p HD video recording, an 8 MP front camera and aptX Bluetooth.

The HTC One S has a 3.7in screen and keeps Android 4.0, Beats Audio and aptX Bluetooth but settles for 720p HD video recording, a 5 MP camera and 1GHz processor.

As a nice aside, all three new HTC smartphones come with a free 25GB Dropbox storage allowance.

All three HTC One handsets are due out in Europe in April.