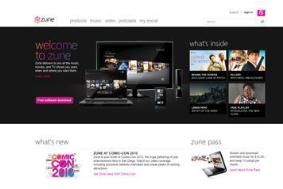 The store and service will trade under the Zune name, first used as the name for Microsoft's digital music player launched in 2006 to take on Apple's iPod.

Last November, Microsoft launched a film-streaming service under the Zune brand name for the Xbox 360 in 18 countries, including the UK.

It's expected that the new Zune Marketplace music store will offer 8m songs at prices that are "competitive" with iTunes and Amazon. The songs will be in high-quality MP3 format – between 256kbps and 320kbps – and available via PC, Windows Phone 7 phone or Xbox 360.

The Zune Pass streaming service, which will cost £8.99 a month, has been available in the US since November 2008. It allows unlimited downloads and streaming of music from Zune Marketplace, but only while the subscription is paid. Stop paying, and the songs are deleted.

The Zune Pass service will be offered with one-, three- or 12-month rolling subscriptions, including a 14-day free trial.