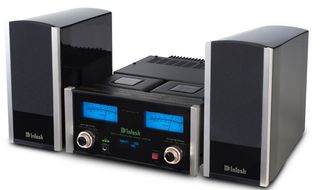 The MXA70 is hand-built in McIntosh's Binghamton factory in New York. It features an advanced 50-watt McIntosh amplifier along with in-house aluminium speakers and a dedicated headphone amplifier. A high-quality McIntosh DAC is also included and features four digital inputs.

The speakers are finished in high-gloss piano black and have been custom designed to complement the electronics. Carefully selected driver components are housed in custom-cast vibration-controlling aluminium cabinets, with 19mm titanium-dome tweeters and a 100mm treated-paper bass/midrange unit housed inside the speakers. A rear-ported design has been used to enhance the low frequencies and boasts an operating range of 60Hz-45kHz.

The same headphone amp found in the MHA100 can be found in the MXA70. It benefits from a new adaptation of McIntosh's proprietary autoformer technology. This offers three selectable headphone impedance ranges: 8-40; 40-150; and 150-600 ohms, enabling all headphone types to deliver optimal McIntosh quality.

The MXA70 also features McIntosh's Digital Engine. This offers users four digital inputs: coaxial; optical; balanced digital AES/EBU and USB, all of which support encoding up to 32-bit/192kHz. Two analogue inputs, including balanced, are also onboard.

A Class A/B amplifier with complimentary-symmetry design has been used in the MXA70 and features ThermalTrakTM output transistors. These feature precise bias current control for ultra-low crossover distortion and cool operation.

Tone controls are provided for greater customisation across a range of source material and McIntosh's Power Guard technology is also included. This is a waveform-comparison circuit that continuously monitors input and output signal and dynamically adjusts them when necessary to avoid potentially damaging clipping.

The McIntosh MXA70 is available now sporting the classic McIntosh 1950s styling, including fibre-optic-illuminated glass front-panel, retro knobs and stainless steel chassis. It's on sale for £5995.

MORE: Read all our McIntosh reviews and news