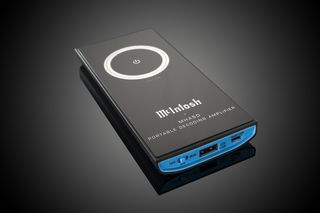 Laptops and portable devices may be great pieces of kit, but when it comes to audio performance they often leave a little to be desired.

That has opened up a market for portable digital-to-analogue converters (DACs), and amplifier specialist McIntosh is aiming to grab a slice of the action with its MHA50.

McIntosh has applied its amplifier know-how to the MHA50 by including the brand’s proprietary Headphone Crossfeed Director (HXD) - technology more usually found in its high-end amplifiers.

Physical inputs include USB and USB type-B for laptops, Apple devices and Android equivalents compatible with On-The-Go USB technology. Three USB cables are included in the box, and support for aptX Bluetooth 4.1 adds wireless connectivity too.

The audio output is a gold-plated 3.5mm jack. And with two gain settings, the MHA50 can supposedly drive headphones with impedances ranging from 8-600 ohms.

It may not be a typical McIntosh product, but some trademark design traits have been carried over. The MHA50 is largely aluminium, with a glass front panel and touch-sensitive volume control knob inspired by some of the company's other products.

The McIntosh MHA50 will be available in the UK from November.