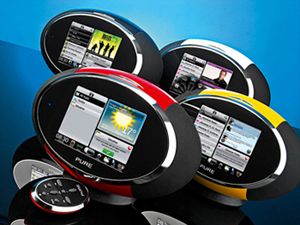 Pure’s sexy Sensia internet radio is a real head-turner, but it’s had some usability issues since its release back in 2009. Has the latest update sorted things out?

When we first saw the Pure Sensia internet radio it received a qualified, four-star verdict. While it promised a lot, and delivered in parts, numerous upgrades were required – and it was once those were done we thought the Sensia might really hit the sweet-spot where internet radios are concerned.

We’ve had the product on long-term test for some time now and watched as updates have been drip-fed over the last 12 months, with the key update finally taking place just before Christmas. So now looks like a good time to take stock and re-assess…

On the surface, it’s a simple beast. A DAB, FM and Internet radio that can stream music from a PC, too. Rather nifty, but nothing too ground-breaking. What sets the Sensia apart, and continues to do so, is the large, touchscreen display and the added functionality offered by internet apps.

Navigating the incomprehensible world of internet radio has always been a problem, and the Sensia’s large display was a bold attempt to bring order to chaos.

Alongside the touchscreen was a promise of added content via apps giving access to social networking sites, image streaming services, weather updates and more.

What wasn’t to like? Well, unfortunately the apps were few and far between, and the touchscreen was frustratingly tough to use. That’s the trouble with first impressions – you only get to make the one.

Living with it hasn’t changed our minds. The latest v2.4 update came with “fundamental changes”, including “improvements to screen scrolling speed” and “general improvements to the user interface”, but we still find it wanting.

Tweaks have made things better

So, the positives: the placement of the power button on top of the unit, where it’s often natural to rest your hand as you scroll through screens, made it easy to accidentally turn off. The addition of a ‘standby confirmation’ pop-up message eradicates that, which is good. It’s an extra button press that we can deal with here.

Scrolling around the interface might be slightly better but it can still be sluggish at times, and the volume (which doubles, crucially, as the mute button – a fairly key button) is still something of a fine art.

The remote comes in handy at this point, though using this when you’re in touching distance strikes us as a bit daft. (Unless the screen gives you any gyp.)

There are now more apps, with the addition of Twitter, Facebook, Google Picasa, weather and an RSS reader. They’re clever additions, too, with the pretty weather app taking pride of place on our display.

But anything that requires text input, such as Facebook or Twitter, hasn’t had us coming back more than once.

Flow Songs, a service that allows you to tag and buy a track as you listen is much more effective and a neat feature. Whether it will replace the existing means of buying content in our affections is another matter.

The Sensia’s sound is as poised and coherent as this type of product gets. There’s a rather vague quality to the soundstage – perhaps a by-product of the position of the loudspeakers inside the cabinet – but in all other respects it’s thoroughly enjoyable.

For all its foibles, part of us still enjoys seeing the Sensia in our kitchen. The eye-catching design and large screen always get admiring glances, and while it’s fiddly, it’s arguably still quicker to get to stations than on other knob-controlled internet radios.

So, a solid performer that looks great and promises über functionality. But it still flatters to deceive when it comes to the interface.

A day in the life

Having opted for a kitchen rather than bathroom placement, it’s a quick glance at the Sensia for the time, date and weather while we make breakfast, setting us up for the day ahead and ensuring we have the necessary coat or short sleeves.

Check in to The Lounge online for some daytime catch-up listening – I’m Sorry I Haven’t A Clue from BBC Radio 4 is a lunchtime well spent – and being able to remotely add any recommended internet radio stations is a touch.

Back home and using the search function gets us to the station we want quickly enough, but it’s the volume control that can be a real fiddle – thankfully the remote removes the touchscreen from the equation. We ponder a quick look at Twitter, but it’s far, far easier on our phone.

What about the sound?

For all the talk of apps, features and touchscreens, simply listening to the radio will inevitably be high on your to-do list for Pure’s Sensia.

So it’s handy that the Sensia is rather good at this, too. Listening to talk radio, it’s clear and authoritative, with BBC Radio Five Live sounding balanced and stable.

The popular Radio Paradise broadcasts at a healthy (it’s all relative) 192kbps, sounding punchy and musical with it, while the equally alluring Roots Rock Reggae crackles along at 32kbps – which only adds to its charm. The Sensia is much more than a simple radio – but that part is great regardless.

The Sensia connects to our network easily enough, and we’re straight down to business adding our favourites across the three tuner modes. The sometimes fiddly and sluggish touchscreen controls are causing headaches, however…

The Twitter app has been joined by a similar app for Facebook. It takes some prodding to get logged in, and ultimately we prefer the more informative weather app. Though perhaps that says more about our friends?

Finally get round to signing up to the Pure Lounge. Register online, connect the service to your radio using its serial number, and then you can listen online live

or to podcasts, plus organise all your favourites.

We’ve uncovered the holy grail: the kitchen timer. Also getting to grips with Flow Songs, which allows you to get a track ID on a song as you listen and then with the touch of a button buy the track from 7Digital’s library. It works, too.

The big update is finally released, but not only does the Wi-Fi update not work, it seemingly ‘bricks’ the Sensia. Thankfully, connecting it to a PC instead allows us to complete the update. A close call there.

After a few weeks of playing around with the ‘all new’ Sensia, we’re still not convinced. The interface just needs to work much better to make navigating