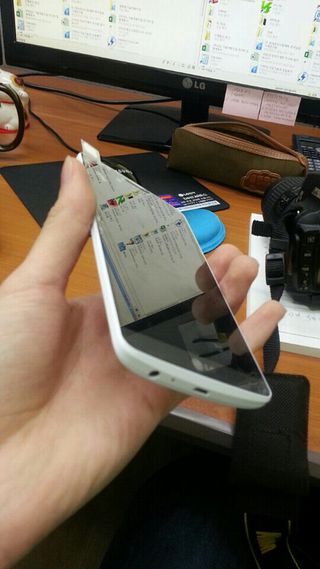 Korean tech website Seeko.co.kr has unearthed a couple of images alleging to be the upcoming LG G3 smartphone.

What is apparent from the images, is that the front of the phone is completely void of any physical or touch-sensitive buttons.

This would tie-in with the Knock Code unlocking feature, first introduced on the LG G Pro 2 and subsequently added as a feature to the G2 and G Flex.

The rear button assembly, first seen on the G2 is present once again, but this time assumes a flatter design.

A sensor can be seen next to the rear-facing camera too, much like the one seen in other recent picture leaks.

The LG G2 is expected to be unveiled on the 27th of May after an official invite was sent out by LG. The Korean firm also confirmed its existence and a Q2 release in a recent press release.

But will it make it on to our list of best 2014 smartphones? Only time will tell...