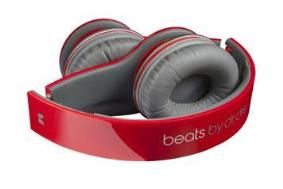 They're releasing a special edition set of headphones, the Monster RED Solo HD, and $5 from the sale of each pair will go directly to the Global Fund to support Aids programs in Africa.

"We're honoured to have the opportunity for Beats by Dr Dre to join Lady Gaga with Bono and (Product) RED in its efforts in fighting Aids in Africa,"says Jimmy Iovine, chairman of Interscope Geffen A&M Records.

Susan Smith Ellis, CEO of (RED), adds: "Music is part of (RED)'s DNA. We were co-founded by Bono, we sponsor (RED) Nights concerts and partnering with Beats by Dr Dre builds on this and gives music fans a way to help reverse the epidemic of Aids in Africa by listening to the music they love."