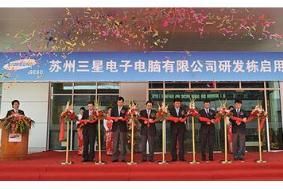 The £1.4bn plant will be built at the Suzhou Industrial Park, about an hour outside Shanghai, where Samsung Electronics Suzhou Computer Co., Ltd opened its new R&D centre last Thursday.

That facility will undertake half of Samsung's global notebook computer research, while the TV plant, due onstream in 2011, is expected to use 7.5-generation glass to cater for strong Chinese demand for LCD TVs in the 30in+ class.

It's predicted that the the Chinese LCD TV market will be worth more than £10bn by 2013.

Samsung will provide some 35% of the total investment in the new plant, and is expected to start talks with potential partners for the venture, including local TV manufacturers.

The Samsung move follows an announcement by rival LG that it's planning to build a state of the art LCD panel plant in Guangzhou, China, and Sharp's forthcoming discussions with China Electronics and the city of Nanjing, with the aim of setting up a joint-venture LCD panel plant there.

It's thought the establishment of these factories could cause a change in the shape of the worldwide TV market, driven by the global economic situation and predictions of demand from China and other emerging markets.

What once seemed an unstoppable upward trend in TV screen sizes, with ever-larger LCD screens appearing, could now become refocused on the requirements of the markets in which demand is healthiest. And in China, along with other territories being targeted by manufacturers aiming to create new markets, 30-40in TVs are the most popular.

However, the changing shape of the market may go some way to solving the recent shortages of LCD displays, which have been keeping prices high.

With the Samsung, LG and Sharp plans for Chinese plants, and Panasonic's intention to open an LCD panel factory in Japan next year, some industry analysts are now predicting a worldwide glut of LCD panels.

And that will drive prices down, along with the planned earnings of major Japanese LCD panel manufacturers.