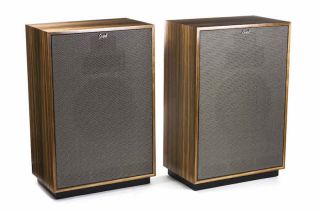 Alongside the Klipschorn and Heresy speakers, Klipsch will be celebrating its 70th birthday with a limited run of the Cornwall and La Scala speakers.

The Cornwall launched in 1959, and was designed to serve as a larger, full-range alternative to the Heresy. The La Scala launched later, in 1963, as a “portable”, more affordable version of the Klipschorn.

Each heritage speaker, of which only 70 will be made, will feature an anniversary plaque identifying its numbered sequence in the series. It will also have an Australian walnut wood veneer, a silver luster grille cloth and special edition logos.

The Cornwall speaker has a three-way design: two horn-loaded compression drivers for the midrange and treble and a direct-radiating 15in woofer for the low frequencies.