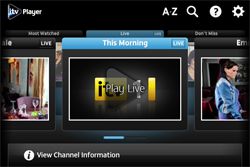 An update to the ITV Player app has added the ability to watch ITV1 and ITV2 live on iPad, iPhone and iPod Touch.

Also new is Apple AirPlay mirroring, which allows you to stream content directly from your iOS device to a TV screen using Apple TV or Apple Airport Express.

ITV will be sharing the broadcast rights for Euro 2012 with the BBC, meaning you can now watch ITV's live matches on the ITV Player app. The BBC iPlayer app already allows live streaming via the app.

You'll need a 3G or WiFi connection to watch the live streaming content or WiFi for catch-up programming.

The update to the ITV Player iOS app is now live on the iTunes Store.