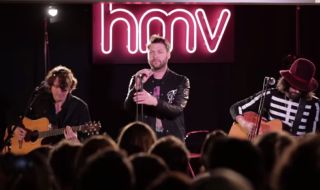 The retailer also reported its highest vinyl sales since the mid-90s, with more than 350,000 units sold - an increase of 170% year-on-year.

CD sales were up 1.5%, while DVD and Blu-ray sales were 0.5% higher in the year to December 2014 compared to the previous year, claimed HMV.

The retailer placed particular emphasis on Black Friday and Cyber Monday deals, in addition to live in-store performances and signings from the likes of Take That and Kasabian (pictured above).

HMV ran in to trouble at the start of 2013, before it was bought by restructuring specialist, Hilco Capital - acquiring 132 HMV stores across the UK.

Hilco Capital chief executive Paul McGowan said: "HMV has captured more and more market share in a year when major new movie releases have been scarce and there have been only a few major album successes.

"With a bumper year of new releases already planned for 2015, we expect to have overall growth in like-for-like DVD and Blu-ray sales - as well as continued growth in the physical music sector with vinyl also expected to continue its revival."