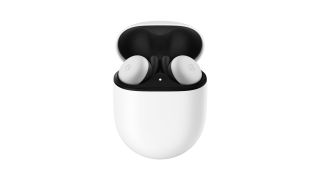 Announced back in October during 'Made by Google 2019', the next generation Pixel Buds are finally here.

The Google Pixel Buds 2 – redesigned sequels to the original, 2017-launched Pixel Buds – have hit their spring release, now available in the US for $179.99. Pricing and availability for the UK and Europe are to be confirmed.

The Pixel Buds 2 claim to bring an improved hands-free command experience, while thankfully retaining their handy real-time language translation. There's also an adaptive sound feature that can automatically adjust the volume as you move between noisy and quiet environments.They also sport long-range Bluetooth connection that Google says is stable "up to three rooms away" or, when outside, "across a football field". Probably an American football field.

Battery life is still a modest five hours, although a charging case takes that to a more competitive 24 hours – on a par with the AirPods but below that of the class-leading Sony WF-1000XM3 earbuds. A 10-minute charge in the case delivers up to two hours of listening time and up to one hour of talk time, too.

Their redesigned build is sweat resistant to IPX4 certification (meaning they should be able to survive water splashes) and they're available in 'Clearly White' and 'Almost Black' finishes.

The new Pixel Buds can be purchased at several US stores, including Google Store, Best Buy, Verizon and T-Mobile. But can they beat the best wireless earbuds? We will have to wait for a full review to find out.