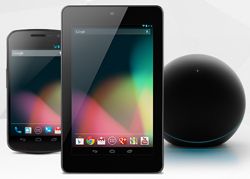 Coming days after Apple’s own 'mini iPad' event and Microsoft’s launch of Windows 8, Google looks set to reveal some key information about the future of their Android platform although at the moment what follows is still speculative.

The Next Web reports Google will unveil two new Nexus 7 tablets with 32GB of storage (up from 16GB), with one also adding 3G functionality. Both could be on sale in the UK in time for Christmas, joining the existing Google Nexus 7. Rumours also persist of a Nexus tablet in time for Christmas that will sell for under $100.

Rumours have also gathered pace that Google will be presenting a 10in Samsung-made tablet at the event, possibly with the Nexus branding.

Codenamed ‘Manta’, speculation around the tablet indicates that it will have a 2560x1600 pixel resolution at 400ppi, beating the current iteration of Apple’s iPad.

Early reports have also suggested the possible announcement of a 5in tablet from HTC along with a new nexus smartphone, the LG Nexus 4, powered by a S4 processor with 2GB of RAM and packing a 4.7 inch display.

Last but not least is news of an Android update 4.2 (‘Key Lime Pie’) with details noted as improvements to the stock camera suite (panoramic photos are available) and the ability to access multiple accounts on one device, a feature that’s been referred to as a more ‘family friendly’ feature for the Android platform.

The event will be streamed live at YouTube.com/Android 3pm UK time on October the 29th and we'll have all the coverage right here.