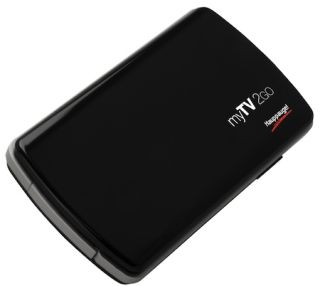 With the impending Olympics – has anyone managed to find a BBC programme of late that doesn't have an Olympic reference in it somewhere? –, thoughts have already started to turn to where and when we'll be able to watch the events.

TVs in the office? Two weeks off? Snaffling the odd glimpse here and there on smartphones, tablets or computers?

Memories of the last Olympics were that office attendance became a bit patchy, even though the time difference with Beijing meant that most of the events took place late at night and during the early hours. With the London events during the daytime, the warnings about unauthorised absences, and the effects on businesses, are already filling in the gaps on slow news days.

For those wanting to watch on their smart devices, of more concern will be the effect on their data usage when streaming TV all day every day to keep up with the events.

Which is where devices such as the Hauppauge! myTV 2GO come in, allowing you to watch TV on your smartphone or tablet without impacting on your data limits.

How? Well, it combines a Freeview TV tuner with a Wi-Fi transmitter, all in a tiny battery-powered package smaller than a packet of cigarettes.

It gives 3.5 hours of use between charges, can be juiced up from a computer via a USB cable, and connects to your handheld device using Wi-Fi, or a computer wirelessly or via that same cable.

Oh, and if that slimline, lightweight unit still seems a bit lardy to you, there's an even smaller version for iOS fans: the myTV 2GO-m (left) is connected to, and powered by, the portable device using the dock connector.

Allowing both viewing and recording of live TV using Fuugo TV for DVB-T software – available as a free app for portable devices and on a disc in the box for laptops, netbooks and the like – , the Hauppauge! units are currently in the shops and the usual online outlets at around £120 or less for the Wi-Fi version, and around the £100 mark for the dedicated iPad version.

Time for a bit of a confession: we ran a news story on the myTV 2GO a few months back, and I've had a review sample for a while, but for various reasons it seems to have slipped through the 'things to do' net on more than one occasion.

But of late I've been having a play, and if you were seriously into sports, I can see how this little device may well provide the 'fix' for your addiction.

It has its limits: that three and a half hour battery life may be one stumbling block – although the iPhone charger I usually carry provided a solution when I was laptop-less – , and reception using the little telescopic antenna can be patchy.

It didn't find any Freeview stations in the notorious wireless blackspot that is Haymarket Teddington, a typical steel-framed Faraday Cage of a building, but was much more successful in a more real-world location (the back garden at home!).

That sorted, and with the iPad Wi-Fi'd to the Hauppauge!, it was simple to watch TV, with a picture quality at least on a par with streaming content over conventional Wi-Fi connections. The advantage of the myTV 2GO, of course, is that you don't have to be near your home router, pay for a Wi-Fi connection or find some nefarious means of getting online.

Anywhere there's enough TV signal, you're in business, and the menus and screen operation will be familiar to anyone not averse to a spot of jabbage and swipage – which of course means anyone used to the kind of device with which this pocket-sized TV tuner is designed to be operated.

OK, so it's more of a cool toy than a must-have companion, and I suspect the dedicated dock version would cane the battery in your iOS device (by the way, ever seen how long a latest-gen iPad takes to charge fully from flat?).

But for the truly sports-addicted, shivering at the prospect of missing a single moment of the beach fencing, cycling behind a little motorbike or freestyle synchronised rhythmic weightlifting – or indeed the cost of keeping up using a mobile data-plan – this could be just the thing for what we are optimistically still hoping will turn out to be Summer 2012.

Meanwhile I think I've come up with an even better use for the myTV2GO.

Weather willing, I may just be using the review sample in the garden while 'others' in the house are watching the Olympics.

I mean, there must be something else to watch on some other channel, mustn't there?