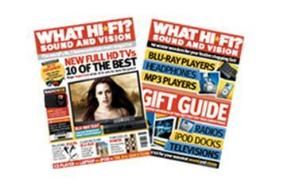 It's packed with enticing hi-fi and home cinema kit to tempt you, from budget Blu-ray players and a selection of our Best Buy TVs, to headphones, MP3 players, DAB radios and iPod docks.

This month's Supertest is a mighty battle between all the big-name 46-47in flatscreen TVs, including models from Panasonic, Philips, Sony and Samsung.

If you're tempted by 3DTV, then don't miss our special 3DTV feature in which we sort fact from fiction.

For hi-fi aficianados, there are Group Tests of £300-£350 CD players from Cambridge Audio, Denon, Marantz and NAD, and £650-£750 floorstanding speakers including the all-new Monitor Audio Silver RX6, Mordaunt-Short Aviano 8 and Tangent Evo E45.

Got a bit more cash to splash? Then check out our Temptations section, in which we put ATC's CA-2/P1 pre-power combo, Leema's Antila II CD player and Marantz's UD9004 universal Blu-ray player through their paces.

All this and more is in the bumper December 2009 issue of What Hi-Fi? Sound and Vision, on sale now. Don't miss it!