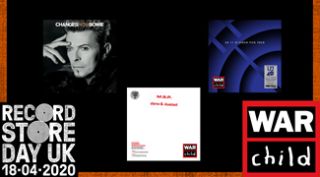 Ahead of the full list of Record Store Day releases going live at 6pm this evening, we have news of the first three confirmed albums.

David Bowie's CHANGESNOWBOWIE, which has never been available on record, will be released in limited quantities on LP and CD. "CHANGESNOWBOWIE is a nine-track, mostly acoustic session, recorded in 1996 in New York during rehearsals for Bowie's 50th birthday concert at Madison Square Garden," says RSD.

A 40th-anniversary edition of U2's 11 O’Clock Tick Tock from 1980 is also being released for Record Store Day. RSD says it "includes the full-length version of 11 O’Clock Tick Tock and the original 7” B-side Touch, plus two previously unreleased live recordings from the band’s show at the Marquee in London in September 1980. Pressed on 180gsm transparent blue vinyl".

Last but not least is a 'very limited edition' 12" LP of Manic Street Preachers' Done & Dusted LP, which features mixes of the tracks La Tristesse Durera (Scream To A Sigh) and Roses In The Hospital, taken from the band's 1993 album Gold Against The Soul.

Record Store Day UK has announced War Child as its Official Charity Partner for these three exclusive, one-off releases, which will only be available in Record Store Day participating shops on Saturday 18th April (the day), with £1 from every record sold going towards the charity.

Consider our appetite whetted ahead of this evening's announcement.