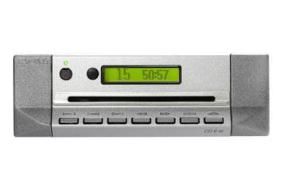 Given the concerns, we thought we'd better check things out with the boss of Cyrus Audio, Peter Bartlett. Here's what he told us:

"It reads as if one consumer had a problem. Our view is that his unit may have been damaged in transit. I am not sure why he didn't go back immediately to his retailer where it would have been replaced without question under our retailer support scheme.

"Some retailers have been helping us by evaluating pre-production units that have, over the last month or so, been fitted with different software versions to road test the many servo options. These were then assessed and final production settings written into the production code.

"I can't believe the customer has one of these units, I think he has possibly been getting mixed message, but whatever is the case we should have this unit back and will swap it for him immediately."

Bartlett also claims that the new SE platform used in the CD 8 has proved far more stable than the Philips-based CDM 12 transport used in the old CD8x model. "It is more stable in long-term tests and plays a wider range of marked discs with scratches etc," says Bartlett.

So there you have it. Straight from the top. If you've experienced any other problems with the CD 8 SE, let us know. We'll be testing a full production of the CD 8 SE shortly, and the full review will appear in the November issue of the magazine, on sale September 18th.