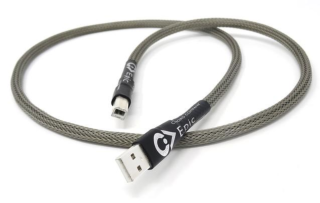 As the old adage goes: in life, you get what you pay for. It stands to reason then, that when connecting physical digital components like DACs and streamers together – part of any self-respecting music-lover's daily life – the same rule applies.

Based in Wiltshire near Stonehenge, the Chord Company – purveyor of cables since 1984 – is no stranger to the sentiment. It would argue that its latest digital audio interconnect isn't excessively pricey, at least not by its high standards.

The new Epic USB cable features the firm's unique Tuned ARAY conductor concept and is built in a very similar manner to its top-of-the-range Signature Super ARAY USB. The main difference is that the Epic is half the price of its big brother, at £400.

Chord Company says that while the conductors in the Epic are slightly different, in just about every other respect the same design philosophy is applied and the Epic USB's performance is only fractionally behind that of the original Signature USB.

To get into the design's nitty gritty, Epic USB contains four conductors (two of which are individually shielded), improved silver-plated copper conductors and uprated, high-speed PTFE insulation. The earth shielding connection is yet further protected from high frequency noise with a two-layer braided screen.

The cable also features refined USB connectors (type A and B), silver-plated to UK specs, and all connections are hand soldered by Chord's own engineers.

Yes, it does look like a standard USB cable. But here's another old adage: don't judge a book by its cover. Chord Company's website states humbly: "We don’t produce any product unless it adds to the musical experience, so put any preconceptions to one side, borrow one and have a listen."

And we can't argue with that now, can we?

Chord Company's Epic USB is available for £400 (1m) from Chord Company dealers – most of whom offer demonstration cables. US availability and pricing isn't yet known, but we'll be updating you on that in due course.