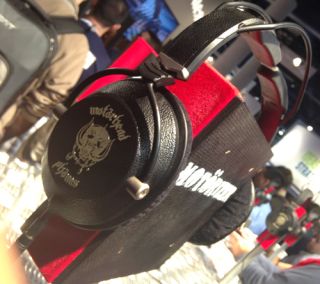 Legendary English rock band Motorhead, who hold the Guinness World Record for the loudest band in the world, have teamed up with Swedish brand Krussel to launch a range of headphones designed for the rock audience and have 'the attitude that rock stands for.'

All of the headphone models feature Motorhead's distinctive logo.

There are nine pairs of headphones in total: three over/on-ears models and six in-ear headphones.

Motorizer - £129.99 - top of the range over-ear and full-weight headphones with in line mic and controls for smartphone use and detachable cord

Bomber - £79.99 - on-ear headphones with in line mic and controls for smartphone use

Overkill - £49.99 - in-ear headphones made specially for smartphone use with in line mic and controls - available in Black, Silver and Brass

An assortment of pouches and cases for smartphones (select Apple iPhone and Samsung Galaxy models) are also available.

While these nine pairs were unveiled to the European/UK market during IFA 2012, today's launch was aimed at the US market (available at the end of April 2013).

Catch up on everything new at CES 2013 on our constantly updated CES blog.