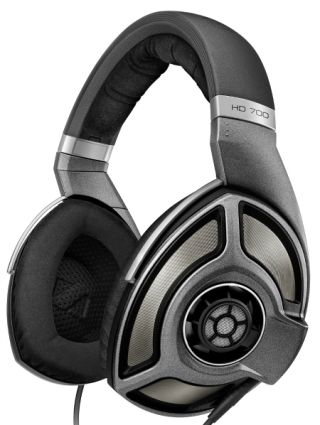 As with the HD800, the HD700 will be available to try at home for a week before you commit to buying.

Sennheiser describes the HD700 as the 'baby brother' of the HD800. It uses a smaller version of the same driver, for example.

Dominic Feeney, Sennheiser product manager, describes the HD700s as being "more forgiving than the ultra-revealing, reference quality of the HD800s". He says the new headphones may therefore better suit users who want to enjoy longer listening sessions or less-than-perfect recordings.

The HD700s - pictured below right, with the HD800s on the left - are also lower impedance and therefore easier to drive than the flagship model.

Feeney says that makes them able (assuming your amp/receiver has a decent headphone stage) to be used without a dedicated headphone amp.

We will get review samples of the Sennheiser HD700 and RS220 headphones early next month, so expect to see full tests imminently!