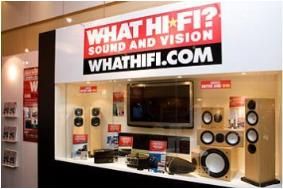 Join us at the Marriott Hotel this weekend and you could win one of our 18 fabulous prizes. There'll be competition entry forms dotted all around the show, and we'll have them on the What Hi-Fi? Sound and Vision stand in the Bristol Suite too.

Pop along to see us and you'll be able to fill in the form on our stand, and drop it in the competition post box. Do so, and you could be the recipient of one of these amazing prizes:

For full details of the Bristol Show, see our special blog.