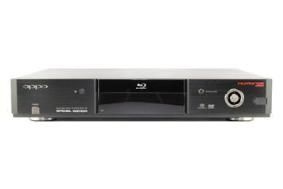 We suspect they'll start hyperventilating when they discover that distributor HIAudio is planning to demonstrate the Oppo BDP-83SE NuForce Edition at the Bristol Sound & Vision Show in February.

According to Dr Hugh Unsworth, a partner at HIAudio Distribution, they are "sole agents" for the model in the UK, which sells for £1299 through selected dealers.

HIAudio will be demonstrating the Oppo's CD and SACD capabilities at Bristol, as well as its music streaming capabilities via USB from an external hard drive.

"These Oppo players are Taiwanese made, modified in Taiwan by NuForce and then shipped into Europe," says Dr Unsworth.

Key upgrades on the BDP-83SE include an an improved power supply and new analogue audio stage.

Like the BDP-83SE model on which it's based, the SE NuForce Edition is a Profile 2.0 Blu-ray player capable of decoding all the high-definition audio formats and playing DVD-Video, DVD-Audio, SACD and CD discs.

But supplies are limited, as this week's shipment "is just about sold out", according to HIAudio.

For full details of the Bristol Show 2010, see our special blog.