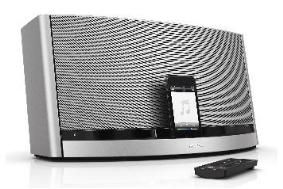 First up is its £699 SoundDock 10 digital music system, which joins the original SoundDock and SoundDock Portable models in the Bose line-up.

"The SoundDock 10 system is for people who want the sound quality of a primary music system for their Apple iPod or iPhone," says Phil Hess, vice-president of the Bose Home Entertainment Division. "We started with a clear goal: to deliver unparalleled audio performance without the need for complicated equipment."

It incorporates new and existing Bose technologuies, he says, including a new version of Bose's proprietary waveguide technology and a revamped Bose woofer for deeper bass.

Works with Apple iPhone/iPod
Two proprietary Bose Twiddler transducers (a combination of a high-frequency transducer and midrange driver) are positioned in the front of the system to create "accurate musical reproduction".

SoundDock 10 is 'Made For iPod' and 'Works With iPhone' certified, and is compatible with any click-wheel iPod or iPod Touch, and the iPhone 3G S, 3G and original iPhone.

A Bluetooth dock is included in the box and streams music wirelessly from a stereo Bluetooth music phone.

You can also connect other MP3 players, an iPod Shuffle or portable CD player via the aux input, and a video output enables users to play video from an iPod or iPhone on a TV.

An infrared remote controls the system and the basic functions of an iPod/iPhone, including playlist navigation. The Bose SoundDock 10 will be available for £699 from Bose retailers from October 12th.

No software or wi-fi connection is needed. Just plug the SoundLink USB key supplied into your computer, select music from iTunes, internet radio or any other music source and the music will stream via a long-range wireless link that works through most floors and walls.

Added flexibility is provided by the rechargeable lithium-ion battery included as standard.

The new Bose SoundLink system comes in gloss black and will be available from the end of September for £490.

It's also available as an upgrade to the Bose Wave music system for £149.