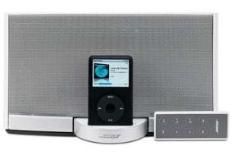 At some point towards the end of the last century, Bose products became shorthand for a sort of loft-living, upwardly mobile lifestyle that we were all invited to aspire to. Consequently, even people who've never heard a Bose product seem to have an opinion about them.

Our own Bose experience has been mixed in the past, but this dock didn't get far from its packaging before we were reminded why so many people hold the company in such high regard.

Awfully expensive
In classic Bose style, the SoundDock Portable seems at first to be awfully expensive for what it is. There's no facility to stream video files from your iPod (in fact, extra features extend no further than a 3.5mm auxiliary input) and it's unassuming to gaze at.

The remote control carries only basic functions and the huge mains plug means it's tough to plug anything in next to it. The swivelling dock is a sophisticated touch, though, and the rechargeable lithium-ion battery is integrated neatly.

The rear-firing reflex port doubles as a carrying handle, too, so the Bose is as portable as these things get.

Packing a portable punch
The dock regains more credibility when it's up and running, too. Money Mark's Never Stop sounds appreciably wider than the unit, with surprising punch and drive.

Timing and integration are good, and the Bose displays a beady eye for detail. There's some vagueness where the upper bass frequencies meet the bottom of the midrange - deeper voices can sound fractionally blunted - but across the rest of the frequency range it demonstrates natural musicality.

Even the unruly Athlete Cured by The Fall is managed without fuss, the under-rehearsed ranting granted some shape. In fact, the SoundDock Portable can turn its hand to just about any music - only the fiercest dance track shows up the bottom end's lack of outright control.

The likeable sound, coupled with neat, tidy design and effortless portability, make this as convincing a dock as we've heard from Bose in a while. We just can't help thinking that the price is a touch high - and that's where it loses a star.