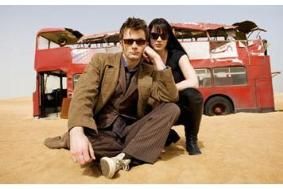 The Corporation says that not only will this improve picture quality for those watching online, it'll also give many viewers a chance to experience HD for the first time, without having to buy a set-top box.

Among the programmes set to appear in HD on the iPlayer are Doctor Who (pictured), Kerwhizz and Dragons' Den, and the new version of the player will feature a customisable viewing window, and a diagnostic tool to optimise the service to suit users' download speeds.

The BBC says the new viewing experience will offer pictures almost twice as good as the previous high-quality service.

The new release will also see the full release of the new BBC iPlayer Desktop, while a cross-platform manager will allow programmes, including the HD ones, to be downloaded by users of Windows, Mac and Linux.

At the moment the HD service will only be available on the online iPlayer, but the BBC also plans to roll out the service to other platforms, such as Virgin Media and Sony's PS3, and via Freesat boxes, using their Ethernet connection.

However, as yet no date has been set for these extensions of the service.