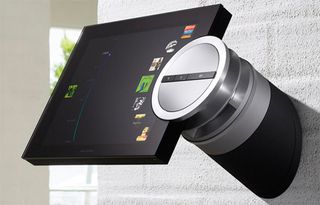 We're in Struer, Denmark, visiting Bang & Olufsen's HQ and have been given a tour of the company's impressive museum and a demo of its showroom, where (among other things) we saw the BeoSound 5 music system – now with Spotify integration.

A free online software update allows existing BeoSound 5 owners to add Spotify, and all new BeoSound 5 units are now fitted with it as standard. The update brings streaming of 20 million songs and 14,000 internet radio stations from Spotify Premium to the system, without having to use an external device such as a smartphone or tablet.

"Bang & Olufsen owners told us they wanted Spotify and we listened," says B&O's category manager Theis Moerk. "The partnership with Spotify is an important step in keeping B&O owners up to date with the growing availability of digital entertainment."

BeoSound 5 connects to a variety of sources including NAS drives, DLNA, AirPlay and A2DP Bluetooth devices, as well as supporting playback of WMA and FLAC lossless files.

Bang & Olufsen has also recently announced its expansion into the headphone market with the launch of the BeoPlay H6 and H3 headphones – we'll be testing the latter shortly.