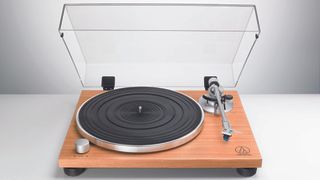 Audio Technica may have built a reliable reputation for turning out good turntables – the veterans have over 55 years experience in the turntable and phono cartridge business – but that hasn’t led the company to rest on its laurels when it comes to attracting a new fan base.

The former (the flagship) boasts a dark walnut wood finish, while the latter sports a teak veneer - both applied to dense wooden chassis that have been chosen for their inherent anti-resonance qualities.

Designed to plug into an existing audio set-up, both decks feature a built-in phono preamplifier, allowing them to plug straight into active speakers. Alternatively, that can be bypassed for a hook-up to an external phono stage or an amplifier’s phono input.

Moving magnet cartridges from the company’s recently introduced VM95 series are attached to the aluminium (AT-LPW30TK) and superior carbon fibre (AT-LPW40WN) tonearms. The flagship model also benefits from a more advanced cartridge – the VM95E, as opposed to the VM95C – as well as a sensor-monitored motor to ensure accurate platter rotation at 33 1/3rpm and 45rpm speeds.

Among the seven new turntables Audio Technica is announcing at CES is the four-strong, entry-level LP60X series, which is where multiple ‘modern-day’ features come in.

For £99, the Audio Technica AT-LP60X (pictured) has My First Turntable written all over it (that’s right, don’t settle for the suitcase model). Its three pricier siblings each have an extra modern-day function that figuratively sits outside of the traditional turntable duty box.

The AT-LP60XUSB (£149) features a built-in USB output digitising your vinyl collection to a PC or Mac, while the AT-LP60XBT’s aptX Bluetooth functionality allows users to stream their vinyl wirelessly to Bluetooth-enabled devise, such as speakers and headphones, for £179.

Want to plug in some headphones instead? The AT-LP60XHP (£149) features a built-in headphone amplifier and 3.5mm headphone jack so you can plug in cans. It even comes with a suitable 250AV pair that are ‘sonically and aesthetically matched’.

The new models feature improved tracking and reduced resonance for a smoother sound. Each of the belt-driven turntables are fully automatic, so just a press of a button will have platters spinning and cartridges tracking. Onboard preamplifiers mean they can plug straight into active speakers or an amplifier’s RCA line level inputs, and dedicated AC adapters handle AC/DC conversion outside of the chassis, reducing noise in the signal chain.

Their Audio Technica AT3600L moving magnet cartridges feature replaceable diamond styli, and all models come boxed with an Audio Technica slipmat, a 45rpm adapter for playing 7in singles and a removable dust cover.

If your aspirations are to become Ministry of Sound’s next DJ, you may want to take notice of Audio Technica’s forthcoming DJ-orientated AT-LP120XUSB (£245).

The next-gen version of the brand’s established AT-120USB has had quite the makeover, with a more streamlined profile (it’s shorter), a new DC servo direct-drive motor, for more consistent rotation speed, upgraded anti-skate control for greater control over the S-shaped tonearm, and an improved preamplifier with a switchable phono/line output.

With selectable 33 1/3, 45 and 78rpm modes, the LP120XUSB plays all types of records - including 78 shellac singles, for those with compatible cartridges. Like some of its aforementioned siblings, the LP120XUSB also uses Audio Technics’s VM95E cartridge and offers a USB output for recording vinyl to digital files

DJ needs are met with specific features, such as a detachable stylus-type target LED light to help cue records in dark rooms.  They can use the reverse function to play records backwards for scratching, or experiment with pitch tones.

CES 2019: all the news from the world's biggest technology show