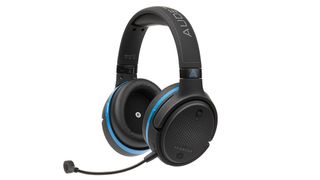 Audeze has announced two new wireless gaming headphones designed for the forthcoming PS5 and Xbox Series X, as well as older consoles. The Penrose (pictured top) works with PS5, PS4, Windows and Mac, while the Penrose X (pictured below) is compatible with Xbox Series X, Xbox One and Windows.

Both headsets feature the US firm's highly regarded 100mm planar magnetic drivers, in addition to a detachable 'broadcast quality' boom mic for chat and streaming. Audeze says the mic is capable of reducing an impressive 20dB of background noise, so you should be able to clearly hear fellow gamers sling insults at each other.

The Penroses both sport 2.4GHz wireless connections for low latency, and come with a USB dongle for connection to Xbox Series X or PS5 consoles. You also get Bluetooth 5.0 with support for SBS and AAC codecs for pairing the headsets with a mobile device.

Even better, the wireless and Bluetooth connections can function simultaneously, which means users can tweak sound settings in real time via the Audeze HQ app. Handy.

The US-based headphone maker is known for its premium headphones, such as the four-star LCD-1s, which carry suitably premium price tags. But here's some good news: the Audeze Penrose will retail for £299 ($299, AU$499), with the first 250 pre-orders in the UK and US available now for £249 and $249. The first batch is due to ship in early September.