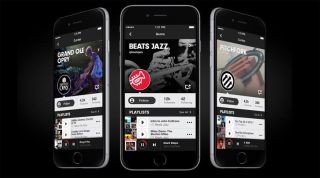 9to5Mac.com has reported that the Cupertino tech giant could be priming its streaming service for release as part of its iOS 8.4 update, which means it will be automatically ported to any iOS device that carries out the update.

And we say that Apple "could" because, while iOS 8.4 is currently in full development, the company is apparently still considering whether to release its streaming service as part of it. The alternative option is that Beats streaming would be released as part of iOS 9, the latest iteration of the operating system that's due to arrive in the autumn.

If it does come packaged inside the iOS 8.4 release, that will mean it follows the release of Apple's smartwatch - the Apple Watch - that many are expecting to see in April.

It's not just iOS 8.4 that Apple's working on at the moment, however, with iOS 8.3 now handed over to developers before its predecessor - 8.2 - has even shipped.

This update (8.3) is expected to bring a whole host of new features - including wireless CarPlay support, which will mean users won't be required to plug their iPhone into a CarPlay compatible head unit. A new Emoji picker, easier Google log in and Apple Pay support for China are also among the features.

And that's not all, because iOS 9, - rumoured for an autumn release - is believed to be bringing with it bug fixes and under-the-hood changes.

With all that in mind, it looks like Apple has a busy year ahead in terms of updates. And while it's not clear exactly when, we certainly know that it's a case of when not if Apple's streaming music service will arrive.

MORE: Apple to take on Netflix with video streaming service?