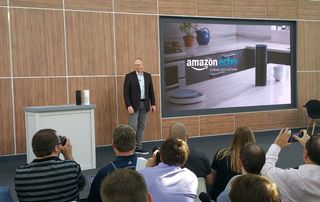 Amazon has confirmed its Echo voice-controlled speaker is coming to the UK and Germany this Autumn. Pre-orders are set to begin today, with the Echo speaker to begin shipping on 28th September.

The Echo will be joined by the all-new Echo Dot, a smaller unit designed to connect to existing speakers, which is also set to be available to order later today before shipping on 20th October.

And if you're really taken with the device, you can buy a six-pack or 12-pack of Echo Dot devices. You'll get one free Dot when you buy six, and two free Dots when you buy 12.

The Echo speaker uses Amazon's Alexa voice-assistant and seven integrated microphones to offer a range of services above and beyond the average Bluetooth speaker, from talking to connected home products such as smart lightbulbs to finding local restaurants and calling taxis through Uber.

Amazon announced a host of UK partners to coincide with the UK release, including Spotify, Tunein, Radioplayer, Sky Sports, The Guardian, Uber, Just Eat and more.

We also know that Sonos is working on integrating the Alexa assistant having announced a partnership with Amazon last month.

The Amazon Echo ($180) launched in the US in June 2015 and has since been joined by two related products, the Amazon Echo Dot ($90), a puck-sized device much like the Google Chromecast Audio that's designed to connect to existing speakers, and the Amazon Tap ($130), a smaller version of the Echo speaker.

Connection to Amazon's Alexa speakers is via wireless Bluetooth or a standard audio cable, after which you can control various apps using voice commands.

In the US, supported music apps include Spotify, TuneIn and Pandora, as well as smart home apps from Philips Hue, Samsung and Nest that allow you to control your lights, heating and more. Further tie-ins with the likes of Uber and Domino's have allowed users to bark even more instructions at their Amazon speakers.

Dave Lim, senior VP, described Alexa as “a computer in the cloud completely controlled by your voice”, and gave a nod to the voice-controlled computer in Star Trek when talking about the company's original inspiration for the system.

And now the Amazon Echo will be on sale in the UK and Germany, in black and white, alongside the new Echo Dot - just in time for the Black Friday and Christmas shopping seasons. You can pre-order the new Echo products on Amazon now.