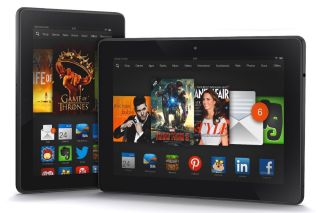 Amazon has announced its latest range of Kindle Fire tablets will begin shipping from November.

The Kindle Fire HDX will ship in two different sizes: a 7-inch and an 8.9-inch, aiming to take on the Nexus 7 and Apple iPad respectively.

One feature that Amazon feels will tempt buyers is a 'Mayday' button, which will give users immediate access to Amazon customer care support, 24/7 – and all for free.

A representitive will be able to take control of the user's screen, drawing on it if need be to point out the buttons. They can interact by audio or video depending on connection quality.

The Kindle Fire HD meanwhile will receive a processor upgrade to 1.5GHz from 1.2 and a new thinner, lighter outer shell. Amazon are now selling this at just £119, in a bid to keep consumers from snapping up the budget tabs recently released by Tesco and Argos.

Both new models look more than capable of stealing away consumers from Google or Apple. All eyes are now on Cupertino to see what Apple will unveil at the iPad launch event next week.