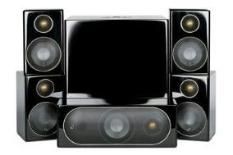 The old Radius range was great, but this new HD system is even better – our Awards judging just got harder

Monitor Audio might be best known for its traditional-looking stereo speakers and 5.1 systems, but the company also manufactures the compact and stylish Radius range, the first generation of which can boast numerous accolades, including our Product of the Year Award in 2006.

Even before newer packages like the KEF KHT3005SE came along to steal the Radius's crown, Monitor Audio was hard at work on the second generation (in fact, the company says these speakers have been in development for five years).

The Radius range has always consisted of a large number of speakers, allowing buyers to mix-and-match a system to their taste. The new range is even bigger, but here we're looking at what is likely to be the most popular set-up. It comprises four R90HDs for the satellites, the R180HD for the centre, and the R370HD subwoofer.

Subwoofer packs a hefty punch
Stylistically, the changes to the satellites are only minor, but they are welcome, particularly the more flush and stylish grilles, which you're less likely to want to remove – a good thing considering the vulnerability of the gold dome tweeter underneath.

The bundled wall brackets are also of a less fiddly design (you can still opt for the smart dedicated stands at £150 a pair), while the subwoofer is more obviously different, being a mix of the old, stylish Radius sub and the Award-winning RSW12 that came with the previous generation of this system.

Seeing the impressive new subwoofer in action, it's clear Monitor Audio has delivered much of the ability of the Award-winning RSW12, packaged into a squat, stylish, downward-firing unit.

The depth and punch it offers is quite exceptional, providing equally terrific thrills through the explosion-tastic Die Hard 4.0 Blu-ray and the bass-heavy hip-hop sounds of Flobots' album Fight With Tools.

Superb surround experience
Of course, a 5.1 system that's only good with bass would be entirely useless, so it's a good thing that the satellites are also extremely capable. Try the Batman Begins Blu-ray and the system impresses with great clarity, dynamics and solidity.

Dialogue is detailed and nuanced, surround effects are immersive and accurate, and action scenes are dramatic and controlled, even when the system's being asked to fill a space the size of our largest testing room.

The soundstage that's produced is coherent, involving and tonally balanced, with even the chunky bass delivery being controlled enough to avoid dominating other frequencies.

Our only point of warning is that the generally thrilling treble can very occasionally get a touch over-excited, highlighting a little sibilance in some soundtracks, and this should be taken into consideration when system-matching.

Other than that, though, this is a no-reservation recommendation. Will the Radius be winning one of our Awards next month? We can't tell you just yet, but it's certainly a major contender.