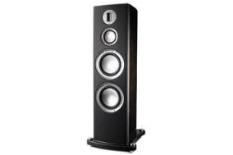 If you’ve got five grand to spend and want a pair of big floorstanders, these Monitor Audios should be right at the top of your list

The Platinums were a long time coming: they were first announced more than a year before they finally appeared, but the company wouldn't release them until every detail was spot-on. The wait was worth it – nothing in the company's recent history prepares you for how good these speakers are.

The drive units are ground-up designs owing little to any of the brand's previous products. The highlight is the ribbon tweeter: it's an in-house unit rather than bought off-the-shelf from an OEM manufacturer – the route most other manufacturers take when they want to include this type of exotic design.

Neither are the midrange and bass drivers simple variations on the metal drive units Monitor Audio normally uses: their cones are made from aluminium and magnesium skins, separated and damped by a Nomex honeycomb resin. In theory, the light, rigid and well-behaved cone should result in a detailed and agile sound.

Optimal damping
The cabinets are all new, too: the plinth, front baffle and internal midrange enclosure are made from a mineral-loaded polymer said to be inert and optimally damped. The idea is to minimise cabinet-related distortion, and so deliver clearer results.

Add low-key yet classy cosmetics, plus arguably the best-finished cabinet at anywhere near this price level and, on-paper at least, the PL300s would seem to have enough to get the competition worried.

The PL300 are some of the best speakers we've heard, being both transparent and massively detailed, yet with none of the edgy quality that can come with ribbon tweeters and metal drive. These remarkably insightful speakers reveal the production differences between the compressed, hard-charging songs of the Red Hot Chili Peppers and Diana Krall's immaculately recorded All For You with breath-taking ease.

Big bottom
As big speakers with twinned bass drivers, it'll come as no surprise that they deliver plenty of bottom end, but you get excellent definition and speed along with the quantity. Note, however, that you'll need a medium-to-large room plus plenty of space around them if you're to get the best results, even if – unlike many rivals – the PL300s aren't overly fussy about their precise positioning or toe-in angle.

Other pleasing qualities include decent timing and strong dynamics, though we have to say it's the way they handle subtleties, and the seamless integration between the drivers that impress us the most.

The PL300s are far and away the best speakers we've heard from Monitor Audio – and we can't think of similarly priced rivals we prefer.